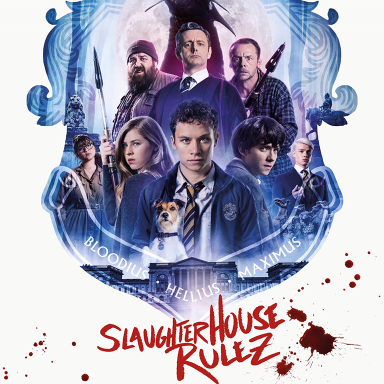 Looking for more cinematic Halloween fun? In a Harry Potter-esque boarding school next to a Hellmouth?

I’ll admit this looks pretty choppy; either this is a bad trailer or they can’t really show what they’d like because “reasons.” In any case, re-teaming Simon Pegg with Nick Frost is never a bad thing. Also featuring Asa Butterfield, Finn Cole, Hermione Corfield, and Michael Sheen; directed by Crispian Mills.

Welcome to Slaughterhouse, an elite boarding school where boys and girls are groomed for power and greatness…and they’re about to meet their match. This ancient and ordered world is about to be shaken to its foundations – literally – when a controversial frack site on prized school woodland causes seismic tremors, a mysterious sinkhole, and an unspeakable horror to be unleashed. Soon a new pecking order will be established as the pupils and teachers alike become locked in a bloody battle for survival…