“Upbeat, articulate and with attitude to spare…” ~ Syfy.com 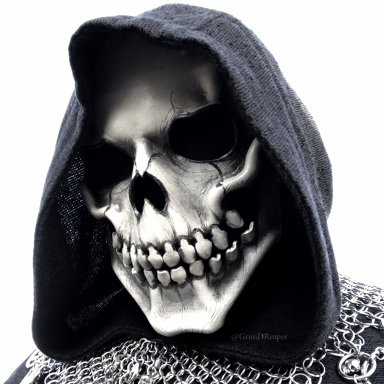 MovieCrypt.com has been reviewing films since 1999 with listings on Rotten Tomatoes and accredited with the Online Film Critics Society and the Houston Film Critics Society. Our host Grim D. Reaper (Death is his middle name) is an infamous psychopomp and cinephile, happily hitting theaters to distract from a dreary day job taking souls.

Greetings from Our Host 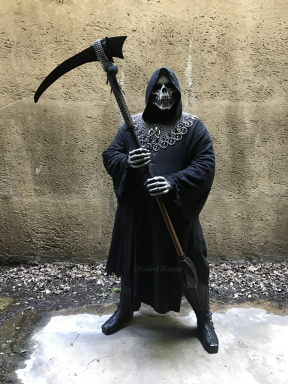 I am Grim D. Reaper — “Death” is my middle name — host for MovieCrypt.com and an internationally recognized celebrity. With my likeness being used in hundreds of films without permission, film critique isn’t dead until I SAY it is.

Founded by The Crystal Lich (rhymes with ‘witch’) in June of 1999, our base of operation is a forgotten cemetery that doubles as the site of our mobile up-link station to our weather control/spy satellite orbiting in a geocentric orbit above the earth. As of May 2006, Grim D. assumed review and media hosting duties for the Crypt; it turns out the Lich isn’t very entertaining in front of a webcam (though he does try). TCL is currently semi-retired but not forgotten… and he despises us for that.

Imagine being buried alive. If you could only take one movie with you to watch over and over again to help pass the time (assuming you survived six feet of earth shoveled over your casket and wouldn’t need to breathe after ninety minutes)… wouldn’t that be horribly boring after a while? The afterlife is no picnic.

Fortunately, we put at least some of that time toward our passion: movies. And since we enjoy sharing our opinions, MovieCrypt.com was created to do exactly that. Since everybody dies but not everyone goes on (immediately, anyway), doesn’t the opinion of an immortal ghoul carry a little more weight than some guy in a tie that hates every movie coming and going? 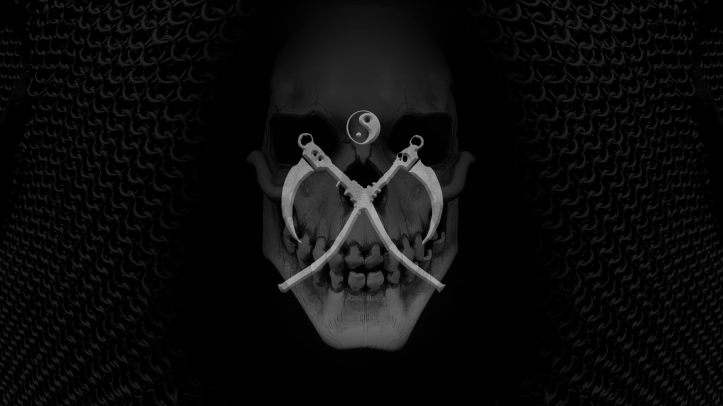 “Why is the Grim Reaper (aka Death, aka whatever) doing video stuff? Doesn’t he/it/they have better stuff to do than whine about movies?” Actually, he’s always been a silent partner… since he got a webcam for his laptop, he won’t shut up. Also, Death (or just ‘Grim D.’ to his buds) cannot be seen unless he wants you to or you’re already dead, so this gives him an extra in so people aren’t taken completely aback when he exposes himself… we mean, reveals himself to you. No, no, when he arrives for your soul! That’s it, nothing else, that’s all.

“Why don’t you guys review more horror films if that’s what you’re into? Isn’t this a horror film site?” Contrary to popular belief, horrific creatures of the night are interested in all film and genres. These moving picture thingies haven’t been around forever, you know, and it’s not like most of us can go to the theater. If we were only interested in gore and slasher films, most of us could just look in a mirror (those of us who can cast reflections, that is) and see far worse than most make-up effects can create. So while we enjoy seeing creepy characters chasing down their living victims (except for zombies; all zombies need destroying) we know there’s more to life than running away to save it. Therefore, our credo is “thrillers, chillers, and killers,” even if there are chicks crying in it (which, if you’re about to die horribly, is a given when you think about it).

“Uh huh. So what if I just thought you guys were really just a bunch of goth geeks with too much bandwidth on your hands?” We’d say you should start looking under the stairs, in your closets, and anyplace else you hear funny sounds coming from late at night when all the lights are off. It’s probably nothing, but check it out anyway, okay? Sleep tight!