It was a pleasant day in September 2018 when I decided to check out Fandemic Tour in Houston, Texas at the NRG Center. Seeking to learn more, a man with a face like a red skull beckoned me: “You’ll like it here — trust me.”

On one hand, it’s what you expect at a fan convention: celebrity guests, panels, cosplayers, photos, and shopping. On the other hand, it’s only using a limited portion of the NRG Center. Con veterans know what they all want is hotel-convention intimacy with convention-center accessibility. No one likes overcrowding, waiting in line all day for a single opportunity, or having nothing interesting to do. It’s a tough act to balance, but does Fandemic Tour succeed?

Maybe the “It” girl with the balloon could tell me more. The Lil Beastie pointed the way I needed to go, smiling inwardly. After a quick and friendly ticket check at the doors — with my assurances I wasn’t there for funny business and my scythe was marked “safe” — this reaper made his way inside. Ultra Sabers was right up front, and I couldn’t help but wonder what a sci-fi upgrade might look like; they could call me “Death Maul.” Or maybe not… 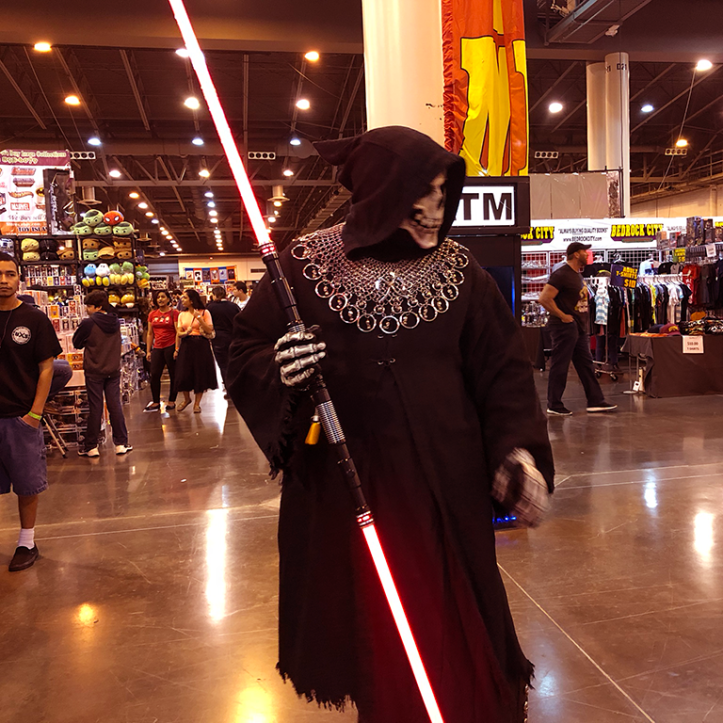 Looks like I wasn’t the only creature of legend taking in the sights. While not seeking revenge on The Doctor that particular moment, Davros told me the celebrities were at the back; he’d already gotten signed pictures with The Boondock Saints.

It was all true. There was even an area cornered off with professional photographers… and a few people eagerly awaiting them.

I’d have to wait my turn, so I decided to try out Ash Williams’ 1973 Olds Delta 88 — aka “the classic.” I could outrun some Evil Dead with a machine like this… or run over them.

It’s true, by the way: Batman took Harley Quinn out on a date to Bedrock City Comics. Batgirl told me to give it back… sigh.

After getting my pictures, I noticed a number of other heroes were onhand. These two were keeping an eye on things from the DC Universe…

… and Xena was getting a little shopping done herself.

These two Wallcrawlers were scurrying all over the place…

… while Mr. Pool’s common-sense seemed to be tingling (he was shopping for a dance belt).

Speaking of the DBA, The Goblin King and his Owl showed up, too.

These guys were looking to cap the undead… … and this Louisville slugger was looking for all of them.

Hershel tried to slip past me. Sorry, old man — you know what being the moral center of the community gets you in the apocalypse. … to Halloween royalty in the author’s section.

After freaking out the “Smallville” panel upstairs, I did a little more shopping about…

… before it was time for a bit of reflection. Fandemic Tour was as advertised, well-organized and steamlined for fandom with a helpful informed staff. Here’s hoping they’ll come back for years to come, but you still have the rest of today to get down to NRG Center for some last-minute deals and signatures. You might want to leave out the part where the Angel of Death mentioned it; I wouldn’t blame you one bit.