Heroes run toward the fire when everyone else runs away.

Having been recruited and trained by Yon-Rogg (Jude Law) as a “noble warrior hero” of the intergalactic Kree Starforce, Vers (Brie Larson) is finally cleared for her first mission by the Supreme Intelligence (Annette Bening) to help rescue a compromised spy from a fringe planet. When the operation goes sour, Vers is captured by Talos (Ben Mendelsohn), an enemy Skrull using tech to extract memories Vers didn’t even know were hidden. Managing a daring escape while causing critical damage to the Skrull ship, she steals an escape pod before crash-landing on a nearby planet — aka Earth circa 1995 — with a desperate need to phone home. Unfortunately, S.H.I.E.L.D. agents Nick Fury (Samuel L. Jackson) and Phil Coulson (Clark Gregg) have a couple of questions for the strangely uniformed young woman first…

With over ten years of intertwining stories on film, Captain Marvel does something rather unique: it goes back to the beginnings of two well-known characters — Agents Fury and Coulson — giving audiences a glimpse of where the modern “initiative” began. It’s an easy argument that all superhero origin stories are the same, but the MCU keeps managing to reinvent their introductions in smart ways that often build onto existing continuity; Michael Keaton’s Vulture, for example, became a Spider-Man: Homecoming villain out of desperation following a failed business venture, feeling justified stealing back what was casually taken away by the already well-off Tony Stark (who was actually just keeping dangerous tech out of the hands of, well, people like The Vulture). As arguably one of the most powerful Marvel superheroes being dropped into the fray, can the MCU justify the insertion of Captain Marvel into the existing continuity as if she’d plausibly been there all along?

Since the first Iron Man movie and its introduction of audiences to the Marvel Cinematic Universe, there’s been a constant sense of world building. It’s sometimes heavy-handed (Iron Man 2) but it’s typically subtle in offering slim details that hint at bigger things. The unique quality setting Marvel apart from DC in comics wasn’t only featuring “real” people being imbued with power (and, you know, responsibility) but that they didn’t exist inside a vacuum. Sure, crossovers were a great way to get readers into other comic books beyond their favorites, but the stories had consequences that affected the lives of other characters that created a known timeline. That almost every hero has been an Avenger in the MCU at one time or another isn’t a coincidence; it’s very much the point.

This installment must have practically written itself once the decision to incorporate so much existing MCU canon into it was made. Threading together tidbits from Captain America: The First Avenger to The Guardians of the Galaxy and even The Avengers, it’ll be hard for even the most ardent comics fans to argue the bullet points taken from the stories of Carol Danvers weren’t applied to create the best version of Captain Marvel for the screen; Larson likewise injects the right amount of spunk into her fighter pilot turned powered Earth protector. Ben Mendelsohn’s Talos ends up being quite a standout as well as Akira Akbar’s brief appearance as Monica Rambeau (who fans may recognize as being someone to look out for in the future… which is technically the present).

Yes, there’s been a flurry of toxic fandom targeting the production for daring have a female lead — setting aside the slight of Black Widow earning that MCU opportunity years ago and is still without a movie of her own. Fortunately, the bell-ringing rhetoric of “they want all men destroyed” is being met with exactly the indifference such petty noise deserves. The only crime committed here is Captain Marvel feeling abbreviated at a two-hour runtime, stuffing in so much newness and reference without fully exploring everything hinted at… and leaving plenty for True Believers to speculate about.

Imagine The Long Kiss Goodnight being retold around a campfire by The Guardians of the Galaxy. That’s pretty much how this goes: nice surprises, a few revelations, a big ending but not too big, plus the now-mandatory mid-teaser and end-credit scenes. Seeing mid-1990s Phil Coulson and Nick Fury is freakishly amazing (using SFX pioneered for Michael Douglas as a younger Hank Pym in Ant Man). It’s wonderful getting this heartfelt action-oriented bundle of Marvel joy right now… because everyone expects Avengers: Endgame is going to gut them with a rusty spoon.

Captain Marvel is rated PG-13 for sequences of sci-fi violence and action, brief suggestive language, that darn cat… and yes, that cameo.

Four skrull recommendation out of four

This isn’t even her final form. 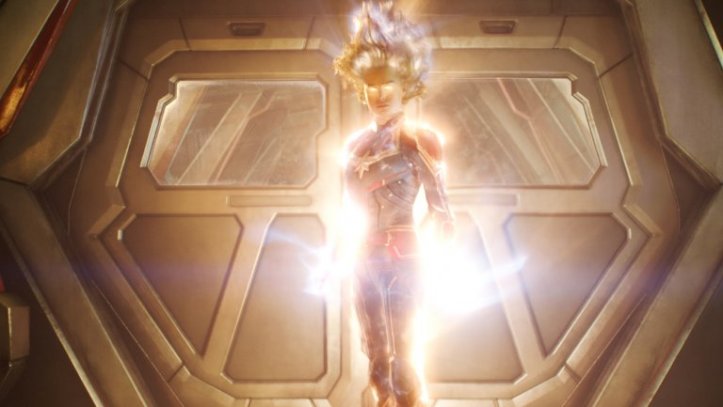